In his posting in May 2014 to The New Chaucer Society’s website, Mark Miller asks “Why do we Care about Chaucer?” Miller argues, “Chaucer’s poetry, particularly the Canterbury Tales, is exceptionally well-suited to the material and ideological conditions of higher education.” “Chaucer, unlike Langland,” Miller remarks, “wrote in a way that the institutional structures of 20th-century higher education ended up finding convenient.” Miller provides good reasons for Chaucer’s appeal in higher education. I wish to add to Miller’s insights. Reasons for Chaucer’s appeal in contemporary American classrooms become more evident when his poetry is placed alongside the writings of John Gower, a poet who usually receives short shrift in literature courses.

Part of the lure of the Canterbury Tales is encapsulated by the phrase “Diverse folk diversely they seyde” (Reeve’s Prologue, l. 3857). In this era when academe promulgates a neoliberal rhetoric of inclusion, a text that appears to offer diversity is particularly compelling. In English departments, syllabi often feature writings, both literary and theoretical, by a range of authors from different ethnicities, races, socioeconomic positions, and sexualities, a range seldom matched by the demographics of bodies in university classrooms. Chaucer’s Canterbury Tales is populated with characters from an ostensibly wide range of occupations and socioeconomic strata, and within this motley crew, more differences abound: the pilgrimage features religious and secular figures, a seemingly protofeminist character, a differently gendered character (the Pardoner), and even a same-sex couple (the Pardoner and Summoner). Moreover, fictive Jews and Muslims appear in the “Prioress’s Tale” and the “Man of Law’s Tale.” Chaucer’s Canterbury Tales creates the illusion of an inclusive world, where knights, merchants, lawyers, millers, artisans, plowmen, and high- and low-ranking religious figures, male and female, can all sit at the same table and conduct a grand conversation about the world, a fiction inflecting William Caxton’s image of the pilgrims seated around a large table, an engraving in his second edition of the Canterbury Tales in 1484 (see fig. 1).

The persuasiveness of Chaucer’s execution of this illusion was encapsulated in the now discarded assumption that Alison, the weaver from Bath, somehow represents the interests of late fourteenth-century Englishwomen and offers a window into their subjectivities.

The Canterbury Tales creates this illusion of diversity in other ways as well. In addition to offering a wide range of genres and poetic forms, Chaucerian poetry, as Miller points out, is rich in signification and seems capable of perpetually generating fresh insights. This endless proliferation of meaning is valued in an educational system structured by an ideology of individualism, where readers are encouraged to invent their own innovative readings, a multiplicity that acts as proof of each student’s own unique talents and capacities. Such endless possibilities for meaning create the impression that Chaucer’s poetry offers a complex multiple address capable of speaking to numerous groups, that there is something for (almost) everyone in Chaucer’s poetry.

Just as Chaucer’s narrational layering prevents any easy stabilization of meaning, these levels of mediation thwart a stabilization of politics. Chaucer is notoriously difficult to pin down regarding any particular stance, which makes him ideal for a humanist literary practice that understands politics to be outside poetry’s domain. As Pierre Bourdieu and Jean-Claude Passeron have argued, the study of Art in educational institutions promotes the celebration and appreciation of bourgeois aesthetics, where, by implication, discussions of Art in relation to economics and politics are dismissed as naïve, reductive, or even boorish. Chaucerian poetry disavows any relation to power struggles beyond the text, as the staging of Cupid’s complaint in the Legend of Good Women indicates. Cupid complains that Chaucer’s Troilus and Criseyde makes men trust women less and that Chaucer’s translation of the Roman de la Rose deters would-be suitors from joining the court of love. In short, Cupid’s lament insists that poetry shapes a reader’s consciousness and affects such behaviors. Yet the bulk of the Legend argues that whoever asks poetry to be held accountable for its politics lacks a true understanding of how to read and appreciate poetry, as the example of stupid Cupid attests. Furthermore, the Legend insists that authors who explicitly attempt to produce socially responsible poetry generate dull, sterile art. Through such logic, the Legend critiques an approach to poetry that, at the end of Troilus and Criseyde, Chaucer aligns with Gower.

The near impossibility of determining Chaucer’s own stances and the unlocatability of his political interests make him an ideal figure to celebrate in humanist approaches to authorship. Chaucer seems to speak from no position in particular but seems to stand above the fray; he appears to occupy a position outside social conflict in his day, providing a neutral, enlightened vision of society. Chaucer’s poetry helped carve out this humanist position for an author at the founding moments of the transmission of a Greco-Roman literary tradition into the English vernacular in the late fourteenth century.

From among the medieval English poets, Chaucer is an obvious choice to honor in contemporary American academe because he worked for a living: as a court page, ambassador, comptroller of customs, justice of the peace, keeper of the king’s works, and poet. Current sensibilities generally find it more palatable to honor a poet who worked in secular occupations than one who lead either a life of leisure as an aristocrat or a life of devotion as a religious cleric. Socioeconomically, compared to many other medieval poets, Chaucer is thought to resemble more closely the majority of scholars in contemporary English departments, so much so that Chaucer is recurrently misidentified as middle class rather than as a member of the proto-bourgeoisie, whose family members belonged to the wealthy mercantile elite and owned substantial property in London.

Chaucer is an ideal author because his ironic tone resembles one celebrated in conventional English literary studies. As Bourdieu and Passeron explain, bourgeois students typically possess mannered elegance, ironic casualness, and grace, and are therefore seen as naturally gifted and talented. Such ironic casualness is highly prized in contemporary academe. By contrast, students whose habits reveal the work and effort that they dedicate to their studies are routinely devalued, interpreted as lacking the gift. Presenting cultural pastimes as a game, Chaucer’s tone is self-assured, demonstrating a commanding ease. Chaucer’s poetry seems effortless, a model to emulate for those who aspire to the types of bourgeois characteristics and aesthetics rewarded in our educational system.

On many of these counts Gower stands as a model not to emulate. Compared to Chaucer’s ease, the stilted learnedness of Gower’s writings bespeaks a poet who expended considerable effort and labor to create his art and hence betrays a poet who must not have been that talented. Likewise, composed in multiple languages, unlike Chaucer’s poetry, Gower’s oeuvre requires hard work and effort to master. Gower’s writings are conventionally seen as didactic and plodding. His poetry is not thickly layered with levels of narration and, although impressive, is seemingly not as productive of new meanings as the work of Chaucer. Moreover, Gower’s fictional narrators do not produce an illusion of diversity: Amans, for example, is a wealthy heterosexual man of leisure, moreover, who is elderly in the end. Gower’s Confessio and Vox Clamantis offer little pretense within the narrative frame of having truck with people from different walks of life. Moreover, unlike the Canterbury Tales, Gower’s poetic style creates no formalist illusions of diversity, since his poetic form is not highly varied. To many, Gower’s work seems dull.

Worse, Gower is rather heavy-handed and upfront about his politics in most of his writings. The stances he promotes, such as insisting that the members of the social body must bow to the ruling classes, are often considered embarrassing. A leisured member of the landed gentry (i.e., the lower levels of the aristocracy) and an investor in mercantile ventures in wool, Gower occupies a recognizable position on the socioeconomic ladder and promotes ideologies that work to preserve his privileged place in society. His aristocratic status does not generally sit well with current English scholars, as commonplace attempts to recast Gower as middle class attest. Similarly, Gower’s defense of the socioeconomic hierarchy is unsettling, as the frequent defenses by Gower scholars of his stance on class indicate: the ubiquitousness in Gower studies of the iconic image of this poet shooting his arrow at a world divided into the three estates acts as such a disavowal mechanism, implying that Gower does not defend the ruling classes but judiciously critiques the faults of the various socioeconomic groups in late fourteenth-century England (see fig. 2). 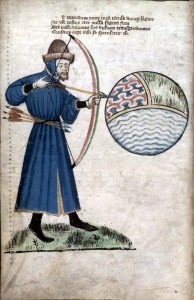 Gower understands—and explicitly operates on the assumption—that poetry shapes consciousness and affects lives, a stance that many late medieval authors held, such as William Langland and writers of saints’ lives. However, such an understanding of poetry is not hegemonically endorsed in current medieval English literary studies, and, when it is endorsed, scholars generally prefer poetry that participates in subtle ways in shaping consciousness and the political terrain rather than poetry that is explicitly didactic, especially when a text promotes a conservative agenda.

With its more casual tone and amorous short tales, Gower’s final tome, the Confessio Amantis, seems to echo Chaucerian poetry. Seeing the audiences that his colleague garnered with his amusing tales, often of love, the senior poet attempted, in his final major work, to win the widest audience possible, as his linguistic shift from Anglo-Norman and Latin to English attests. In the Confessio, Amans stands as a specter of a type of reader that Gower attempted to recruit: a leisured person who is eager to hear and speak at length of love, a figure who demonstrates apathy toward society, a reader to whom Chaucer’s amorous poetry is addressed. The end of the Confessio stages a miraculous transformation of Amans into Gower’s ideal reader: the narcissistic, apathetic lover becomes an enlightened reader who understands the need for social change and who abandons amorous pursuits to reflect on societal strife and to pursue the common good. The Confessio enacts a fantasy of recruiting Chaucerian audiences to a more politicized version of literature with readers ultimately acting in more socially conscious ways as a result. The Confessio stages this recruitment fantasy not just about Chaucer’s readers but about Chaucer himself, a fantasy articulated rather baldly at the end of the Ricardian Confessio, where Venus requests that Chaucer write more like Gower.

In a few ways, Gower is conventionally considered as appealing, sometimes more so, than Chaucer. Like Chaucer, Gower’s transmission of Greco-Roman riches into English and his invitation to readers to enter the treasure trove of cultural riches enshrined in the Confessio attracts contemporary scholars and students alike. Similarly, a mastery of Gower’s oeuvre offers impressive cultural capital, even more than a mastery of Chaucer’s works. Like his colleague, Gower helps carve out for English literature the locus of the humanist author, the visionary who stands outside his society and who offers a disinterested view. Of course, Gower’s promotion of the illusion of the neutral observer contradicts his rather stark statements about the social order. Despite the contradiction, however, some medieval English literary scholars prefer the type of poet that Gower represents compared to Chaucer: namely, a poet who is less dissembling about his politics—regardless how problematic—over those authors who disingenuously disavow that poetry shapes readers’ understandings of themselves, others, and the world around them, even while proceeding under the knowledge that literature does exactly that.